In 2010 our pastor, Steve Jenkins, ventured to Burundi for the first time.  A beautiful landlocked country in the heart of Africa, with wonderful people – yet they have been brutally scarred by civil war and bloodshed.    It was relatively stable at that time, but neighbouring Congo was showing us that things can change in a moment.  The trip made was really to see what the needs are first hand…  and there are many needs. But having connected with some trusted leaders there, he was certain that it was right to take this relationship deepe 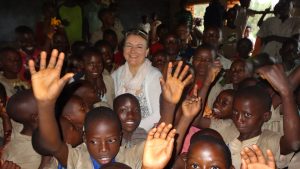 r in the years to come…

Feb 2015 brought a  second visit where some great plans were in motion.  Larisa, Steve’s wife, joined him and  together they took every opportunity to  share all the good news they could

Steve has a quick story to share with you….

“On my first trip to Burundi we were in a 4×4 and ‘up country’ in quite a remote place… they don’t see many cars around there.  We turned a corner and clipped a plate that was on the floor. It belonged to an old woman and she was trying to sell the contents of the plate to survive… there was just a little corn on it, but that had now been scattered across the road due to our accident.  The local villagers immediately cried out and we stopped to see what had happened.  I talked with my guide and offered her a 200 Burundian Franc note as compensation for her loss… I know that was more than she would have got for the grain, so I hoped she would be happy with that.  I was surprised at her response… this old lady began to cry, saying she had never held a real note of this value in her life!

We don’t understand hunger or poverty until we live it, but what we can do is give what we think is a small amount in our culture, that will make a huge difference to those that REALLY need it!

If you want to make a donation where you know 100% will go direct to the needs…  you can give by clicking the Donate button below.