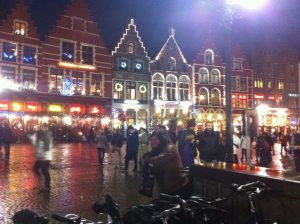 Belgium is a complex country.  So to be over simplistic, you could say this is because over the centuries it has undergone so many radical changes of culture and leadership.  For a concise summary of the political history Click Here.  This is in significant contrast to the UK where there has been nearly 1000 years without invasion. The mindset is therefore quite different.

The current political view from the outside appears to be one of division.  One country with 3 very different federal regions:  Flanders, the Flemish speaking north/west and Wallonia, the French speaking south/east (with a bit of German thrown in too).  Lastly Bruxsels, the cosmopolitan capital and central seat of European government.  The Flemish & French speaking sides of the country have regular political differences with a significant minority often shouting for independence from the other.  The resulting attitude is a paradox – one of compromise yet still wanting to remain very committed to personal values.

Relationally the Belgian is more likely to hold very deep, committed friendships with a few trusted people rather than be open to everyone.  This aspect of their character means that evangelism has become both culturally and personally uncomfortable for a lot of people.  Along side this is the nominal Roman Catholicism across the nation makes for quite an interesting mix!

You will also find the Belgian State to be paradoxical in that it is completely secular in it’s political stances with education and relational values.  Yet it is the government that traditionally maintains and pays for much of the work in the Roman Catholic church.  In recent years a few radical Cardinals have made headlines by standing against the states’ “political correctness”.

The Bible is not a common book in Belgium.  In contrast to the UK where many households have at least one copy, it was illegal to have a copy of the bible until the mid 1950’s. Then there was more struggle with ‘second vatican’ which was not adopted in Belgium (1966) . So unlike the rest of europe, only priests had the privilege for reading the bible, and then only in Latin.  So the word of God had never been heard or read in their mother tongue .  To this day this is still a significant hurdle to jump.

Whilst the Roman Catholic church is still the states ‘official’ church, it is now very poorly attended.

As far as ‘evangelical’ Christian witness goes – the ‘reformed’ churches (Baptist / Methodist / Penticostal / Lutheran etc.) were considered sects until fairly recently.  They currently gain recognition under a combined ‘synod’ that allows them to be called church, but they are still quite few in number. To be an independent congregation like our own Life Central Church  or even Vineyard / New Frontiers and the like, would be to be seen as a sect.  As such, offerings would be heavily taxed and no freedom to witness legally today.

In our short time in Belgium that we saw real change.  The body grew – with new believers, not transfers.  We found a heart in people to see Belgium minister among the rest of Europe.  We have a hope that the vision that was imparted will continue to see new life develop  as people continue to search & hear  God’s Word and move with the Holy Spirit – faith will grow ! (Romans 10v14-17)

At Life Central we are re-connecting with the believers in the Oostende area with a view to growing in relationship and supporting each other with the gifts and ministries that we have available.